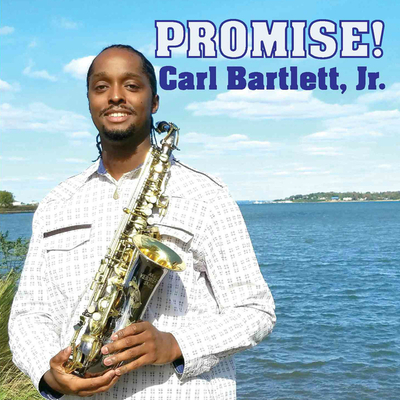 CARL BARTLETT JR is a New York-based alto jazz sax man and he debuted back in 2011 with ‘Hopeful’ – an ambitious album from which we singled out his take on the old ‘I Love Lucy’ TV theme as a highlight. Carl’s just launched his sophomore album, ‘Promise!’ with a sold out show at Manhattan’s Kitano jazz club.

I’m sure the audience were thrilled with what Carl calls his “Post-Bop/Modern Jazz, with occasional leanings toward Avant-garde”. Well now you can make up your own minds as the album wins world wide release.

Carl sets out his stall right from the start with the LP’s title cut. After a bleak, atmospheric opening, ‘Promise!’ takes off into some proper swigging bop. More of the same on the hand-clapping, hard-bopping ‘It’s Been So Grand’.

Elsewhere? Well ‘High Pizzazz’ is a swinging boss nova and there are Latin touches too on the aptly named ‘Ethereal Heartbeats’. The album’s big ballad is ‘As The Gift Unfolds Before My Eyes’ while right now we’ve got ‘The Bartlett Family’ on repeat. It’s a brash affair with the feel of those old 60s TV comedy show themes about it…. maybe dear old ‘I Love Lucy’ was the influence? The other tracks are ‘Dialed In (Like A Laser)’ and ‘Fidgety Season’ which, if my memory serves me correctly, also featured on Carl’s first album.