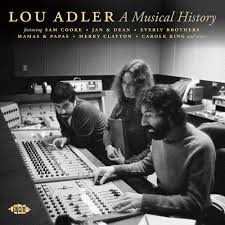 LOU ADLER is the latest music back room boy to be honoured with a retrospective in Ace Records ongoing “Producers Series”.

Multi-Grammy winner, producer, writer, publisher, record company exec, club operator and film director and producer, Adler began his musical odyssey in 1958 writing material for the great Sam Cooke. He then went on to run the West Coast operation of Aldon Publishing which handled writers like Gerry Goffin and Carole King.

In 1965 he created Dunhill Records then started Ode Records. In 1973 he created L. A.’s famous Roxy venue and then moved onto film production – scoring a hit from the get-go with ‘The Rocky Horror Show’, Now aged 80, Adler still owns the Roxy and keeps a keen eye on musical developments.

This 25 track album proffers music from all periods of Adler’s long career. Soul-wise there are cuts from Sam Cooke, Johnny Guitar Watson, Merry Clayton and the wonderful Blossoms. Plenty of great pop too from people like the Everly Brothers, The Mamas and the Papas, Jan & Dean and, of course, the incomparable Carole King.

In 2013 when Adler was being inducted into the Rock and Roll Hall of Fame he was asked about the secret of his success. Typically modest, he said that when you work with Sam Cooke and Carole King, you really can’t go wrong!

LOU ADLER; A Musical History is out now on Ace Records.