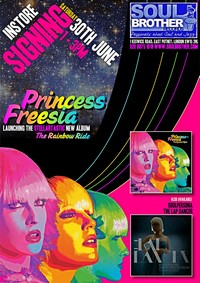 On Saturday 30th June between 1pm and 3pm, Australian-born electro-soul singer PRINCESS FREESIA, will be launching her debut album, ‘Rainbow Ride,’ at the Soul Brother record store in Putney, London.

The London-based singer has sung backing vocals for the likes of Leon Ware, Jean Carne, and The Jones Girls and in 2011 appeared to great effect on Soulpersona’s acclaimed ‘The Lap Dancer’ album. Her keenly-anticipated debut is an eclectic and highly original collection of self-penned songs that are steeped in classic soul but bring something fresh and new to the table.

Noted US soul singer, JOCELYN BROWN, is both a fan of and a mentor to Princess Freesia and says of her protégé: “Princess Freesia is one of the baddest singers I know. She can sing her butt off. She’s not only just a singer, but also an amazing producer in her own right, who writes the most amazing songs and picks up on beautiful melodies and hooks. I love her and I’m very proud of her, I’m extremely proud to know her and she’s my little sister!”

For more info go to: www.soulbrother.com