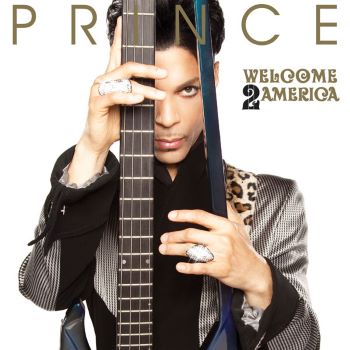 The Prince Estate and Legacy Recordings are to issue a new PRINCE album … ‘Welcome 2 America’. Recorded in 2010, it’s a collection of previously unissued material that was “mysteriously archived” by Prince. We’re told that the album features some of his only studio collaborations with bassist Tal Wilkenfeld, drummer Chris Coleman, and engineer Jason Agel, with additional contributions from New Power Generation singers Shelby J., Liv Warfield, and Elisa Fiorillo and keyboardist Morris Hayes, who Prince also recruited to co-produce several tracks on the album.

The “new” music is being issued on CD and 2LP vinyl, but a four-disc deluxe edition brings together CD, 2LP and blu-ray in a large format package. The blue-ray DVD was recorded live at the L A Forum in April 2011 and features 24 tracks including some unusual covers of songs by people like Bryan Ferry, Kool and the Gang and Bob Dylan. Release date for ‘Welcome 2 America’ is July 30th.