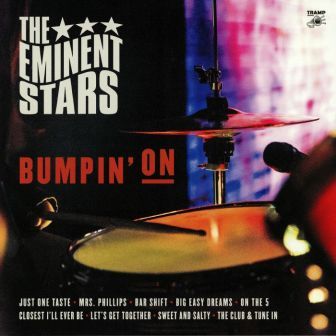 Founded by sax man Ben Mendes and drummer Toon Oomen, THE EMINENT STARS are a Europe-based soul, funk and blues instrumental combo who take their inspiration from the music of New Orleans in the 60s and 70s. We last heard of ’em a few years back with the album ‘Sittin’ In’ which featured plenty of Meters-inspired workouts – notably the opening ‘Ben’s Dungeon’ and the feisty and sparse ‘Jumping Beans’.

The band now return with a new 9 tracker, ‘Bumpin’ On’ which, more or less, carries on where ‘Sittin’ In’ left off… that’s to say , plenty of tough, rough, organic, feisty funk and soul with a European flavour. Highlights include the vocal ‘Bar Shift’ – the tale of a drunkard in a late night bar and the moody, atmospheric ‘Let’s Get Together’. The album also offers a nine minute plus medley – ‘The Club’/’Tune In’ which was recorded live.

THE EMINENT STARS; ‘Bumpin’ On’ is out now on TRAMP RECORDS