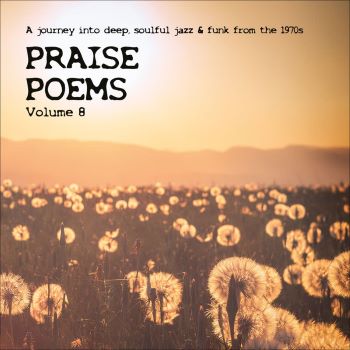 German reissue label TRAMP RECORDS is gearing up to release the eighth volume in their acclaimed ‘PRAISE POEMS ‘series. The new 18 tracker, like the rest of the series, is an eclectic and esoteric mix of largely unknown music from the 60s and 70s and covers all sorts of bases.

The most well-known outing here is probably Ladykiller’s version of Joe Zawinul’s ‘Mercy, Mercy, Mercy’ – best known for the tune, not the band of which little is known save that they hail from Germany. They do create a big, big sound though – almost as big as ‘Promises For The Future’ from another unknown combo, Helmut Pistor’s Big Rock Jazz Band – the sound they create is obvious from their name.

Jazz vocal fans will be delighted by the opener., ‘A Perfect Day’ by Bobby Cole -shades of Mark Murphy but if you want bizarre funk try the wah-wah workout of ‘Moon Madness’ from Allison and Shaffer. Then there’s psycho pop from Portraits In Sound and middle of the road from The Menagerie – both intriguing! For something different there’s ‘Water Gardens of the Moon’ from the Klaas Craats Six which sounds like it was recorded in Laurel Canyon in the 60s – a sound reflected in Rose and Sally Price’s ‘California Feeling . Eclectic and esoteric just doesn’t come into it for this collection!