POWER UP THE TURBINES! 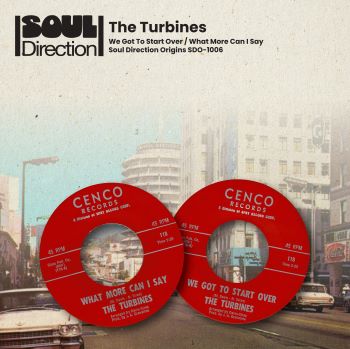 Latest release from UK vinyl reissue specialist label SOUL DIRECTION is actually on their new(ish) imprint…. ORIGINS. You might remember that Origins is  focused on rare and obscure soul releases and this new disc couldn’t be rarer and more obscure. It features a properly obscure harmony group called THE TURBINES who recorded on an equally obscure label, CENCO.

What the soul sleuths at Soul Direction know is this:- Cenco Records was based in Hollywood and was owned by Mike Gradney (who sometimes appears as Mike Gradny). Before launching Cenco he’d worked at Vital and Mambo Records before going on his own with the Spry label. Cenco lasted between 1961 and ’69 and issued two dozen singles and one album – by Ike and Tibna Turner no less!

Very little is known about the Turbines save that they cut two 45s for Cenco. One as “Fred And The Turbins” and ‘We Got To Start Over’/’What More Can I Say’ on which they were billed as “The Turbines” and it’s those two songs that make up the two sides of the new Soul Direction/Origins 45.

‘We Got To Start Over’ is a harmony  group performance with a gruff, gritty male lead (presumably “Fred”?) who sounds a little like David Ruffin. Indeed it does have a Temptations feel, albeit a whole lot rougher. It totally lacks the Motown polish but is none the worse for that. Oddly the opening melody seems to borrow from Motown’s ‘Loving You Is Sweeter Than Ever’.

The ’What More Can I Say’ flip side features a falsetto lead though the gruff voiced one offers odd interjections. Is that another Turbines attempt to ape the Tempts – featuring two leads à la Kendricks/Ruffin?

Northern fans will know the ‘We Got To Start Over’ side. It started winning plays in the 80s and it’s still in-demand; collectors will be delighted to have it on Soul Direction/Origns at a decent price. Learn more @ https://soul-direction.co.uk/