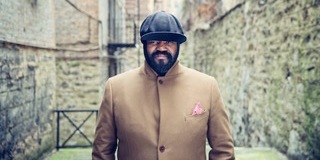 In a recent interview GREGORY PORTER declared “Jazz is having its moment“. Well in his case it sure is!

This weekend sees two of the Cat In The Jazz Hat’s albums sitting fairly and squarely in the official top 20 albums chart. His most recent set ‘Take Me To The Alley’ is at No.11 while ‘Liquid Spirit’ has re-entered at No.18!

Chart analysts put the dual success of the two Decca-released long players down to Gregory’s recent Radio 2 “In Concert”. The achievement puts Porter alongside Adele as the only other artist this year to have two simultaneous chart riders.

Martin Talbot at the Official Charts Company says: “It is a fantastic achievement by Gregory Porter for him to secure two albums in the Top 20. Such success is usually the preserve of huge mainstream artists, so Gregory’s achievement this week really does underline how far he has come in crossing over in the UK.”

Gregory Porter responded: “I’m very grateful for the success of ‘Take Me To The Alley’ and to have two albums so high in the album chart at the same time shows how much the UK accept and support my music.”