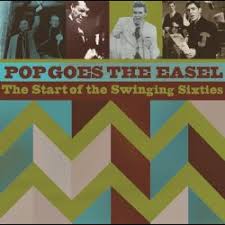 Small record companies are getting more and more imaginative with their output, especially as the copyright laws allow them to freely access material originally released up to 1962. El Records have just issued a great 2CD set with the odd title ‘POP GOES THE EASEL’. The collection focuses on the UK in the early 60s and purports to illustrate some of the traits that helped give birth to what the media dubbed “the Swinging Sixties”. To do this the compilers have assembled the soundtracks to a number of late 50s/early 60s movies and TV series like ‘The Avengers’, ‘The Prisoner’, ‘Idol On Parade’ (a movie vehicle for Anthony Newley’) ‘Its Trad Dad’ (an odd musical movie), ‘Play It Cool’ (directed by Michael Winner) and ‘Pop Goes The Easel’ (an early Ken Russell movie about British pop art… hence the name of this compilation).

It’s fascinating stuff for serious musical historians and even soul and jazz fans will find plenty to interest them here. Obviously, the soundtrack to ‘Its Trad Dad’ featured many big names of the genre – Terry Lightfoot, Acker Bilk, Ottilie Patterson and Chris Barber  – while more “serious” jazz is represented by inclusions from Bobby Timmons, Philip Green and Charlie Mingus. Soul fans will enjoy Gene McDaniels’ great version of Burt Bacharach’s ‘Another Tear Falls’ and the Chubby Checker rarity, ‘The Loose Your Inhibitions Twist’.

POP GOES THE EASEL is out now on EL RECORDS