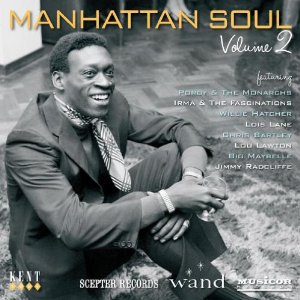 First up there’s a new volume in the label’s ‘Radio Gold’ series. This new 24 tracker focuses on US music that was bigger (chart-wise) in the UK than in its homeland. So, for instance, where jazzer MEL TORME’S ‘Mountain Greenery’ failed to chart Stateside, it climbed to number 4 in the UK… and that’s the story of the collection… an interesting insight into the contrasting tastes of Brits and Americans in the 60s.

The second compilation is ‘Born To Be Together’ – a second look at the songs of BARRY MANN and CYNTHIA WEIL. The Bril Building pair were responsible for scores of pop and soul classics and here you can re-enjoy things like LOU RAWLS’ ‘I’m Satisfied’, THE DRIFTERS’ ‘Saturday Night At The Movies’ and THE CRYSTALS’ ‘Uptown’. Hugely collectable too are CLYDE McPHATTER’S version of ‘On Broadway’ and DUSTY SPRINGFIELD’S ‘I Wanna Make You Happy’. Plenty of pop classics too from people like GENE PITNEY, THE MONKEES, SCOTT WALKER and early blue-eyed soulster LEN BARRY. Great, memory-jerking music guaranteed!