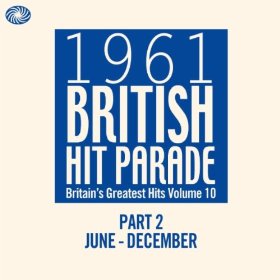 Reissue label FANTASTIC VOYAGE have just released two superb box sets that take a comprehensive look at the UK pop charts in 1961. Each box contains 6 CDs crammed with every hit single that debuted on the Record Retailer pop chart in that seminal year. The first set focuses on the January – June period while the second box covers the six months from June to December.

There is, of course, lots of embryonic soul – including music from BROOK BENTON, GARY US BONDS, SAM COOKE, FATS DOMINO, BEN E KING, RAY CHARLES, GENE McDANIELS, MAURICE WILLIAMS and THE MARCELS. Naturally there’s plenty of classic pop too along with the usual one-hit wonders and the novelty items so beloved of early-sixties record buyers.

Both box sets come complete with an extensive booklet in which record prouder and music historian STUART COLMAN guides us through all the hits and the headlines. It’s a great memory jerking project and you can find out more @ www.fantasticvoyage.com