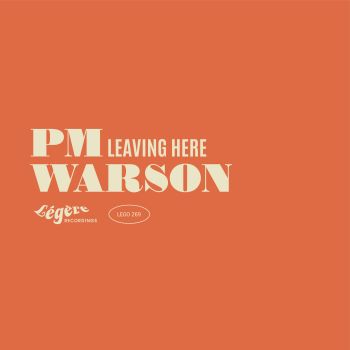 Motown collectors know all about Eddie Holland’s 1963 release ‘Leaving Here’ – something of an early Motown icon. It hit the US hot 100 and was a top 30 R&B hit, but Eddie quit performing soon after (he suffered with stage fright when going live!) and of course teamed up with brother Brian and Lamont Dozier to forge the mighty writing/producing triumvirate.

But his ‘Leaving Here’ refuses to go away. It’s a mainstay at Northern nights and has been covered numerous times – even Motorhead have had a go at it. Latest artist to tackle the song is London-based singer/songwriter P M WARSON. A self-confessed “Modernist” – that’s a mod to you and me, he’s steeped himself in 60s culture citing The Impressions’ ‘Keep On Pushing’ and the Isley Brothers’ original 1964 recording of ‘That Lady’ as two of his favourite records while amongst his favoured artists are Ray Charles, Junior Wells and Magic Sam.

His 2021 debut album, ‘True Story’ won him plenty of fans and friends  while his ‘Soul Boy’ song was used by the Fred Perry brand on one of their promotional videos. The brand could do well to have a good listen to P M’s energized version of ‘Leaving Here’  – a mod anthem back in the day and sure to capture the hearts of new age mods now! The cut comes complete with  girl group vocals, punchy brass, swirling organ and a touch of garage rock guitar parts. Warson says: “This song kind of came up naturally when I was trying ideas out for a new record. It was almost like revisiting my source material. I grew up around the Garage Rock revival and there’s a bit of that in there. I set on an arrangement with two drummers, with a big push to the ‘4’ chord for the bridge, with organ, horns and a call-and-response vocals to really make it swing. It’s almost like a high tempo R&B vignette of all the things I’m into.” Now you know!