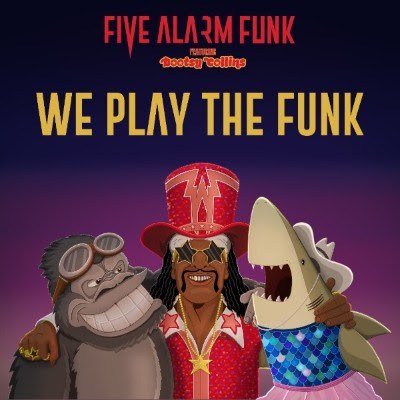 We’re told that these feisty funkateers also deal in gypsy rock, Afro-funk, Latin, ska, punk and even at times prog-metal though there’s no evidence of any of that on their new single. The double A sider features the fairly routine funk workout ‘Wheels On The Bus’ though the other side is just a little different. You see ‘We Play The Funk’ features input from a certain BOOTSY COLLINS.

It seems, that dear old William loved the band’s ‘Capital City’ so much that he asked could he work with them and the result is this bizarre, but tasty four minutes worth of funk. Catchy and insistent, ‘We Play The Funk’ offers up all of Bootsy’s laconic take on the genre. The single is out right now and it also features on a Five Alarm funk EP, ‘Boots and Wheels’.