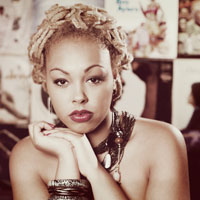 Highly-touted UK soul singer, HARLEIGHBLU releases her debut single – ‘Play Me’ on 29th July. Hailing from Nottingham, the singer was immersed in soul from an early age via her mother’s extensive soul, jazz and funk record collection. Soon she was performing locally and writing her own songs. Working with the reunited MUSICAL YOUTH brought HARLEIGHBLU (her real name, by the way) to the attention of UK hip-hop, soul producer JOE BUHDA. From there it was straight on to a deal with Brighton’s Tru-Thoughts label with an album – ‘Forget Me Not’ – due in Autumn.

In the meantime HARLEIGHBLU’S been making an impression on taste makers like CRAIG CHARLES, who’s espoused her cause on his BBC6 Music show. Indeed, the single ‘Play Me’ is right up CHARLES’ street. It’s an edgy slab of shifting UK street soul with a tough contemporary edge and the slurred but committed vocal style made popular by dear old AMY WINEHOUSE