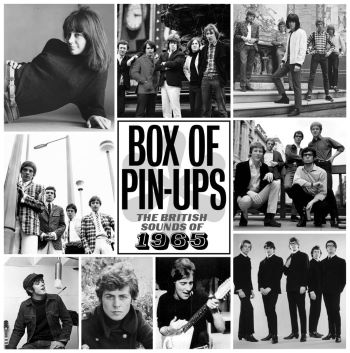 In 1965 iconic young photographer David Bailey published a photo book – ‘BOX OF PIN UPS’  – which, in sharp black and white detail, chronicled what was to be dubbed “Swinging London”. The book is now regarded as an epoch defining volume, essential for anyone studying “the scene” – the era of fabulous beat music (much inspired by US soul and Motown sounds), sharp clothes, all nighters and nascent mod culture.

Using that ‘BOX OF PIN UPS’ title, Cherry Red Records imprint, Grapefruit has just released a fabulous 3 Cd, 92 track collection that highlights some of the best British music of 1965 and it’s a real treasure trove for general music collectors, 60s nostalgia freaks, old (and not so old) mods and the serious soul crowd who like to collect UK covers of favourite US soul tunes.

Naturally the album features plenty of big names from the  sixties – amongst them The Searchers, Manfred Mann, the Zombies, the Kinks, the Hollies and more. But interestingly the compilers eschew the big tunes associated with those acts; instead they’ve chosen  lesser known tracks like ‘Where Have All The Good Times Gone’ from the Kinks and ‘I’ve Got A Way Of Mine Own’ from the Hollies.

‘BOX OF PIN UPS’ also offers music from artists who in 1965 were just starting out but who were to later become big names. So enjoy ‘Why Does It Go On’ from Rod Stewart, ‘The Wizard’ from Marc Bolan and, best of all, a soulful ‘Come Back Baby’ from Bluesology which featured  someone called Reg Dwight on piano and vocals. (spot him in the above picture!)

Naturally over 92 tracks there’s plenty of music from artists who never made it, including, well it is mid 60s music, a strong Liverpool contingent. Bands like the Richmond Group, the Clayton Squares, the Kirkby’s and plenty more meant little outside of Merseyside but for nostalgia seekers, so good to have their music anthologised like this.

Soul collectors will relish the energetic covers of some of their favourites like Graham Bond’s version of ‘Neighbour, Neighbour’, the Wild Oats’ cover of Buster Brown’s ‘Fannie Mae’, First Gear’s take on Dobie Gray’s ‘The In Crowd, the Searchers’ jangly guitar treatment of ‘I’ll Be Doggone’ and a spirited take on ‘Land Of 1,000 Dances’ from mod/soul favourites the Action. There’s room too for blues from dear old Alexis Korner and a sprinkling of other blues-based bands.

Packed in a clam shell box and containing thorough sleeve notes/bios and masses of archive pix, I know  there are plenty of music collectors out there who’d love to have‘BOX OF PIN UPS’ in their Christmas stockings!