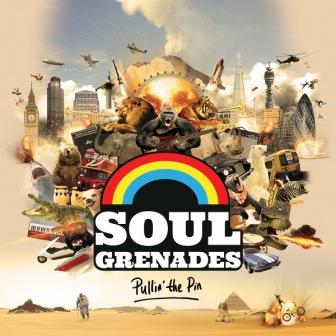 Soul Grenades have performed at some of London’s most prestigious venues including The Jazz Cafe, Pizza Express Jazz Club and The 299; they’ve also supported artists like Brooklyn Funk Essentials, The Mighty Mocambos and Geno Washington.

The band debuted with a well-received EP, ‘Sunshine’ but ‘Pullin’ The Pin’ is their first full length long player and it offers what the Grenades do best…. feisty funk in all kinds of shades. The opener, ‘Play Dem Games’ sets the scene… tough and uncompromising with a fierce vocal from Sabina Challenger. There’s plenty more of the same … like the slinkier ‘London Strut’, the heavy ‘Tongue Ain’t Got No Bone’ and the bass-led ‘I’ve Got To Know’. Subtle differences between them but united by a full funk quotient.

‘Don’t Give Up On Love’ is a quieter… almost a soul ballad but the big building crescendos prevent it from being quite that. The brass fills on it are a delight though (shades of Tower Of Power) and indeed the brass playing throughout is one of the album’s attractions.

The band is celebrating the release of the album with an official launch party gig at Pizza Express Jazz Club in Soho, London on Saturday 15th July.