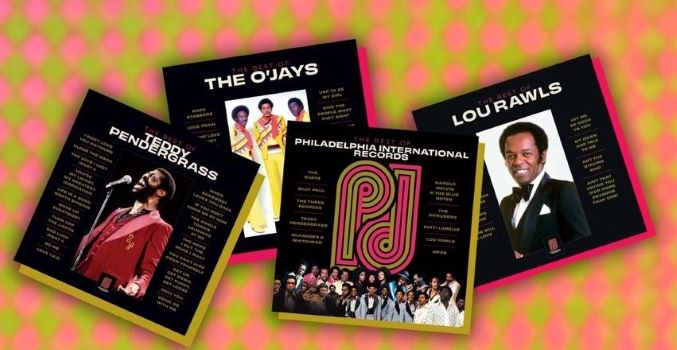 To celebrate the 50th anniversary of the legendary Philadelphia International Records, Legacy Recordings (the catalogue division of Sony Music Entertainment) has just released a series of vinyl ‘Best Of…’ compilations including a various artists set,  ‘The Best of Philadelphia International Records’, alongside six dedicated to some of the label’s top acts… Billy Paul, Harold Melvin & The Blue Notes, The Intruders, Lou Rawls, The O’Jays and Teddy Pendergrass.

‘The Best of Philadelphia International Records,’ is a 12-tracker featuring classic hits offering an overview while the specific artist sets offer a more intimate picture  but they still rely heavily on the well-known tunes.

‘The Best of Billy Paul’ offers 12 tracks and the focus is, naturally, ‘Me and Mrs. Jones’. Oddly, his version of ‘Let ‘Em In’ isn’t included despite its popularity via its use in that annoying lottery TV ad. The Harold Melvin and the Blue Notes collection includes the obvious too and sadly the epic ‘I Miss You’ comes in a three minute edit. Several of the Blue Notes’ songs also feature on the ‘The Best Of Teddy Pendergrass’. You can guess which ones! The Teddy P album is a double vinyl set as is the O’Jays collection – so much great music to cram in!

The single disc sets on Lou Rawls and the Intruders offer an insight into two of the label’s less well known acts amongst the general public. The Intruders’ collection which opens with a clutch of the Gamble label gems like ‘United’ and ‘Together’ offers plenty of treasures.

Clearly these releases aren’t aimed at the soul collector but as an introduction to the best of Philadelphia International’s output, they are excellent. Oddly, there are no sleeves notes and there isn’t the usual download code that’s been  the norm for vinyl releases these days.  The single albums sell at around £17 and the doubles are going out at around £24 and given the current extortionate price of new vinyl, maybe that’s reasonable?