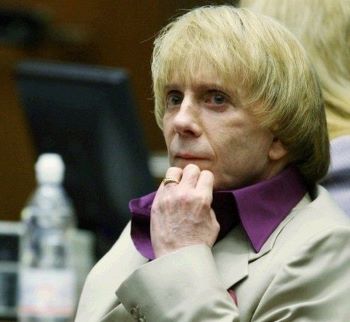 PHIL SPECTOR – music producer probably without equal and convicted murderer – died on Saturday 16th January. He was 81. His death was announced thus by the California Department of Corrections and Rehabilitation; “California Health Care Facility inmate Phillip Spector was pronounced deceased of natural causes at 6:35 p.m. on Saturday, January 16, 2021, at an outside hospital. His official cause of death will be determined by the medical examiner in the San Joaquin County Sheriff’s Office”. Spector had been serving a prison sentence for the 2003 murder of Hollywood actress Lana Clarkson. It appears that he was transferred from a prison to hospital suffering with COVID-19 like symptoms.

Born Harvey Phillip Spector in New York in 1939, his parents were of Russian-Jewish origin. His father killed himself when Spector was a boy, and his mother moved her family to Los Angeles. He began his music career in his teens in the Teddy Bears – with three high school friends. They had a hit single in 1958 with a song that took its title from the wording on his father’s gravestone: “To know him is to love him.” The record went to number one on the Billboard Hot 100, but the group split the following year.

Always ambitious and secure in his own belief he founded his own record label, Philles, in 1961, going on to produce classic girl groups like the Crystals and the Ronettes. His signature production technique soon became known as “the wall of sound”. Using massive orchestras and doubling up on almost everything including drummers, bassists and guitarists he threw everything into the mix – probably best heard on the Righteous Brothers ‘You’ve Lost That Loving Feeling’, his classic Christmas album and Ike and Tina Turner’s ‘River Deep Mountain High’. Though that latter was a huge UK hit, at first, it meant little in the USA and around that time Spector began to harbour self-doubt leading to paranoia.

In the early 1970s, Spector collaborated with The Beatles on their final album ‘Let It Be’ as well as producing John Lennon’s solo album “Imagine”. He worked with many other artists too, notably Leonard Cohen. It’s widely reported that Spector is said to have held a gun to singer Leonard Cohen’s head during sessions for his album ‘Death of a Ladies’ Man.’

Blighted by paranoia and an addiction to drug and alcohol, Spector all but retired from the music scene during the 1980s and 1990s.

In February 2003, actress Lana Clarkson was found dead at Spector’s’ house in Alhambra, California with a bullet wound to her head. Clarkson, it seems, had met Spector hours earlier at a nightclub. Spector claimed the shooting happened when Clarkson “kissed his gun” – but his trial heard from four women who claimed Spector had threatened them with guns in the past when they had spurned his advances. Spector was eventually convicted of second-degree murder and given a sentence of 19 years to life.

Just prior to Clarkson’s death, in a newspaper interview, Spector said “I would say I’m probably relatively insane, to an extent. I have devils inside that fight me”.  Today, responding to news of the producer’s death, Blondie guitarist Chris Stein tweeted: “When we went to Phil Spector’s house in the 70s he came to the door holding a bottle of diet Manischewitz wine in one hand and a presumably loaded 45 automatics in the other”.

Without doubt, Phil Spector was a troubled man but also a  musical genius who created some of the 20th century’s signature sounds and if you doubt his soul credentials dig out any of his Ronettes’ recordings or Ben E King’s ‘Spanish Harlem’ or Sonny Charles and the Checkmates ‘Black Pearl’.