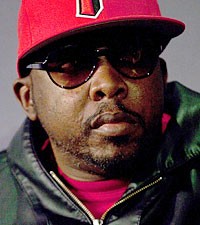 PHIFE DAWG (Malik Isaac Taylor) – the rapper with A TRIBE CALLED QUEST died on Tuesday 22nd March. He was aged 45 and cause of death was given as complictaions arsing from his ongoing diabetes. In 2008 he had had a kidney transplant from his wife

Born in Queen, New York, Malik formed Quest (the group’s original name) in 1985 with school friends. After morphing into A Tribe Called Quest, they signed with Geffen Records before moving to Jive. Their debut album release was 1990’s ‘People’s Instinctive Travels and the Paths of Rhythm’. Their other major releases included ‘Midnight Marauders’ , ‘Beats, Rhymes and Life’ and ‘The Love Movement’ in 1998 and unlike many rap collectives, Quest were known for their special jazz-slanted, witty and often cerebral approach to the genre. In nine years, the group recorded five gold and platinum CDs, and music historians regard them as one of the most influential hip-hp outfits.

In 2000 Phife made his solo debut with ‘Ventilation’ and in 2011 A Tribe called Quest reunited for a series of concerts to help raise money for Phife’s medical bills to deal with his diabetes.