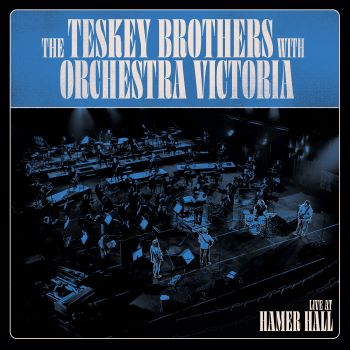 THE TESKEY BROTHERS are one of Australia’s best kept soul secrets. Formed in 2008 by brothers Josh (vocals/guitar) and Sam (lead guitar), they’re aided and abetted by bassist Brendon Love and drummer Liam Gough and between them they peddle their gritty, blue-eyed take on tough 60s/70s soul and blues à la Stax.

Down under, they’re chart toppers while over here the soul crowd got familiar with Josh on the wonderful Northern soul stomper ‘Soul A Go Go’ credited to the Soul Messin’ All Stars. Josh was one of the vocalists.

The Melbourne-based Teskey band are now aiming to break themselves worldwide via the release of a new album ‘Live At Hamer Hall’. The album – yes, a live one – was recorded in December 2020 at Melbourne’s’ famed Hamer Hall and for the performance the Teskeys were supported by the Orchestra Victoria led by conductor Nicholas Buc. On the night the hallowed hall was audience-less (well it was the height of the pandemic) but the concert was streamed live to fans across the world on YouTube. The 50-minute performance featured hits from the band’s two critically acclaimed albums ‘Run Home Slow’ (2019) and ‘Half Mile Harvest’(2017) and their two original Teskey Brothers Christmas songs, ‘Dreaming Of A Christmas With You’ and ‘Highway Home For Christmas’. Those last two making an intriguing and refreshing alternative to your usual Festive music fare!

Other highlights include the poignant ‘San Fransisco’ (shades of Otis’ ‘Dock Of The Bay’) and the dramatic ‘So Caught Up’ (the band’s biggest hit) – like all the 11 tracks, both  showcase Josh Teskey’s warm, smoked whiskey voice while the orchestrations offer empathetic, melodic support, taking the original material to new levels. The album’s out now via Decca Records.