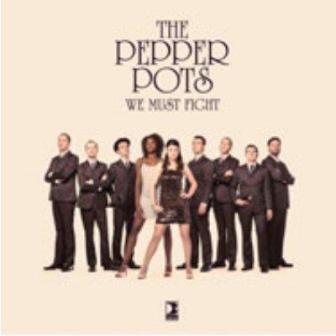 THE PEPPER POTS are a seven piece Catalonian soul band (make sure you don’t call them Spanish) and they’ve just released their 6th album, ‘We Must Fight’. The enjoyable 12 tracker signals a number of changes for the septet – most notably in the vocals department. For this long player the Pepper Pots have drafted in two female singers – Adriana Prunell and Aya Sima. The duo add a new dimension to the group’s sound which for this outing has a real old school, analogue feel thanks to Daptone’s Binky Griptite taking care of much of the production.

Griptite and the band have worked together in the past. The Pepper Pots have been his band of choice when visiting Europe and he’s used them to support the Impressions, Maxine Brown and Eli Paperboy Reed and he was more than happy to sit at the controls for ‘We Must Fight’.

The sound of the album is vintage retro soul and with the Binky G involvement, no wonder there’s a real Daptone feel to proceedings. That particular sound is most obvious on the bumpy, funky ‘Got Me Crazy’ and the lazy, brassy ‘Let Me Go’. ‘Come Back To Me’ is a great old school ballad – worth investigating, as is the more complex title cut. The set though boasts two quite superb, essential soul throwbacks – ‘You’ve Got The Future’ and ‘Free My Mind’. The bouncy former with its confident brass fills has a real Tower Of Power flavour. The gentler latter melds together the feel of early Motown with the classic pop sound of the girl group era and helps define the new sound of the Pepper Pots.