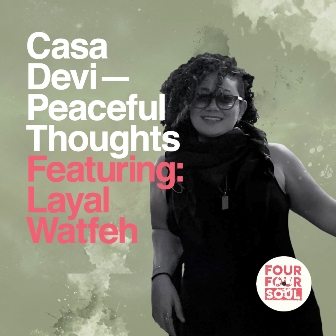 CASA DEVI is an alter ego of well known London producer Tom Davidson (of Reel People fame), and Casa/Tom has just launched his own label… Four Four Soul Recordings. He gets the label into gear with a tune from, yes – you guessed it – the aforementioned Casa Devi!

Said tune is a hypnotic soulful house vibe, ‘Peaceful Thoughts’. The original mix is a mellow jazzy affair set to a broken beat flavoured groove. But, as ever, there’s plenty more mixes; the “Cool Club” mix is a little more house-ified; Pat Bedeau dubs things up  a tad; Luke McCarty and Craig Whitfield (aka HHA) tweak up the ethereal quotient; while Modaji sets things chillier even. Dreamy vocals come courtesy of Syrian born Layal Watfeh and her other-worldly meanders riding over the overall ambience makes the tune fit for the chill out room and (oddly maybe) the dance floor too.