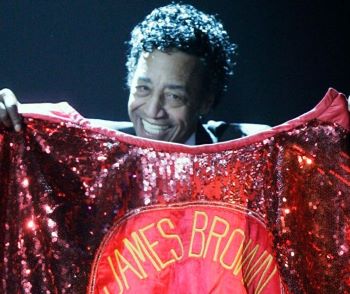 You may not know his name but DANNY RAY, who, we’ve learned, has recently died, played a very special part in soul history. You see he was the mythical “Cape Man” and master of ceremonies for a certain James Brown.

Danny Ray worked with Brown for over 40 years – working the crowd and, of course, bringing out the Godfather’s gilded cape and ushering him on and off the stage for his theatrical encores.

We believe that Ray died at his home in Augusta aged 85.

GIL SAUNDERS is another name not that well known but for some years he was a member of Harold Melvin and the Bluenotes. Teddy Pendergrass, of course, will always be celebrated as the voice of the Bluenotes. When he quit for solo stardom, his first replacement was David Ebo who left himself in 1984 to be replaced by Saunders.

Saunders hailed from Philadelphia and he featured on the Bluenotes last charting album, ‘Talk It up’. He quit the group in the 90s and recorded solo enjoying some local Philly success with ‘In the Heat’ and ‘Let’s Turn In.’

In later life Saunders suffered with MS and lung cancer.