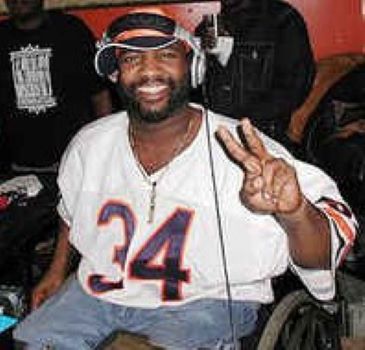 Influential Chicago house music producer PAUL JOHNSON (above) died on Wednesday, 4th August. He was aged 50 and died in an Illinois hospital after contracting Covid.

Born in Chicago in 1971, Johnson will be best remembered for his 1999 hit ‘Get Get Down’ – a UK top 5 hit. In his career he claimed to have released/worked on over 300 dance releases, that despite losing both legs. He was shot in 1987 and partly paralysed from the waist down. Then after a car accident, one leg was amputated (2003); the other limb was amputated in 2010.

Johnson was known as an outspoken apologist for black music producers while French duo Daft Punk regularly cited him as a major influence.

US sources are also reporting the death, at age 90, of soul entrepreneur EDDIE THOMAS (above) – best known as the manager of the Impressions in their heyday. It seems that Thomas died on July 26th.

Born in Chicago  in 1931, his first foray into the music biz was as manager of a group called the Medallionaires. Their local success  impressed a young Chicago group called the Roosters who asked Eddie to manage them too. Eddie suggested a name change to the Impressions. He scored them a deal with Vee Jay, and the rest….

Thomas went on to form Curtom Records with Curtis Mayfield, though much of the business side of the label was handled by Mayfield’s manager, Marv Stuart. After leaving Curtom, Eddie set up a pool of Chicago DJs to promote releases from various labels. The collective was known as Dogs Of War. He also headed his own promotion business with many high profile clients like Barry White and Quincy Jones. Over the years he worked in all aspects of the music business and was even a published poet!