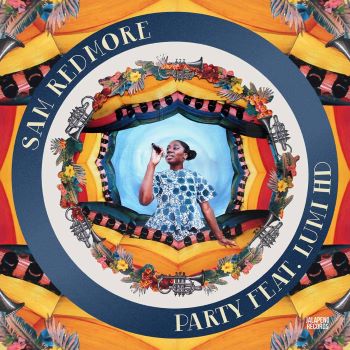 SAM REDMORE is a Brummie music maker. His work as mixer and producer has been hailed by amongst others  Craig Charles, Gilles Peterson, Quantic, Rob Da Bank, Nightmares On Wax and Huey Morgan. Redmore’s previous singles ‘On The One’ and ‘Nagu’ were well supported on the airwaves and in the clubs and Mr R’s set to build on that with a new dance groove, ‘Party’.

A little slower than the previous singles; a bit more stately but still eminently danceable in that cool, sophisticated way, ‘Party’ features a slinky vocal from fellow Brummie, LUMI HD. Sam  says: “Lumi is a seriously talented singer and songwriter, with some strong material already to her name. I knew she would be the perfect person to go to for this as soon as I’d knocked up a basic demo. The track is inspired by some of the neo-soul artists I was listening to at the time such as Erykah Badu, D’Angelo and Potatohead People, and was intended to be something you might hear a little earlier on in the night, but with enough oomph to work once the party’s in full force”

Grab a listen; hear if Sam’s right; the tune’s out now via Jalapeno Records; Party on!