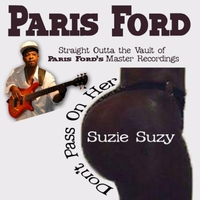 Soul anoraks and inveterate sleeve readers will be aware of the name PARIS FORD. Mr F is one of soul’s most in-demand bass players – and his pedigree goes way back to the 70s when he formed the band Tyrone Thomas & The Whole Darn Family. In 1981 Paris became a mainstay of The B. B. & Q. Band. In his own right he enjoyed chart action with ‘Be My Girl’; then, after that, plenty of session and live work with people likes Rick James, Johnny Gill, New Edition, Evelyn “Champagne” King, Lenny White, Tyrone Thomas, Norman Connors and Lonnie Liston Smith.

Right now Mr Ford is busy re-promoting his in-demand back catalogue via a four track EP –that actually only features two songs – in two different mixes each (i.e. – 4 tracks!)

Songs in question are ‘Don’t Pass On Her’ and ‘Suzie Susy’. The former is a 2017 remake of a 1989 cut while the latter was originally released in ’86. Both are hard, driving soul-funk workouts – not a million miles away from the sound of one time Ford collaborator Rick James.

Your usual download portal and/or CD Baby will allow investigation.