PAIN AND BLISS…. AND FUNK…. 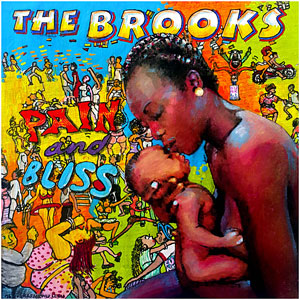 They came together via a shared love for all things soulful and funky and so far their CV includes work with The Doobie Brothers and Kool & The Gang while they played a leading role in the Montreal Jazz festival’s tribute to Prince.

The Brooks have just launched their second long player –a blistering funk attack called ‘Pain And Bliss’ but a quick glance at the track title would tell you that any way. I mean cuts like ‘Funkyshit’ and ‘Funklife’ speak for themselves!

The eleven tracker (there a few brief interludes) is almost 100% funk with the mellowest moment coming via the steady soul groove ‘Last Chance’… though even that one has a toughness all of its own. Our standout is the album’s title cut…’Pain And Bliss’. This one’s a sparse, funk rumble with a growling vocal that evokes the best of a certain James Brown.