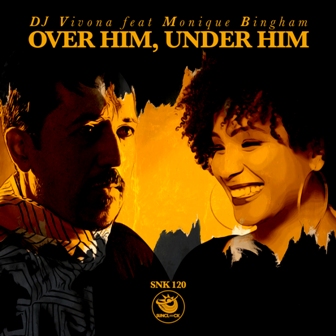 LUCA VIVONA is Sicily’s top Soulful House DJ/Producer. A music graduate of Palermo University, and using the moniker, DJ VIVONA, he burst onto the scene back in 2013 with the mesmeric ‘Another Day’.

His latest offering is the equally mesmeric ‘Over Him Under Him’ which features the powerhouse vocals of Monique Bingham  who, you’ll know, has worked with most of the genre’s dons – people like Kerri Chandler, Jellybean Benitez, Karizma, Louie Vega, Todd Terry and Black Coffee, among others.

‘Over Him Under Him’ comes in four main mixes – afro, deep tech, hypnotic house and jazzy (alongside, of course, the radio edits and instrumentals). Right now we’re going for the jazzy tweak – dubbed “Classic” mix. It features some crazy trumpet work that seems to take its inspiration from the horn sound that Norman Whitfield crafted for the Temptations in their “psycho” soul period (though the beats, of course, are very, very different).

‘Over Him, Under Him’ will be released on Traxsource promo May 7th / Full release May 21st 2020 on Sunclock Records.