OUT FOR THE COUNT! 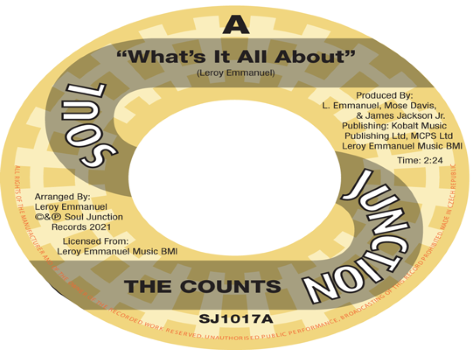 The band began life as the Fabulous Counts – a five piece combo whose first recording experience was with Ollie McLaughlin’s Moira studio where they recorded under the mentorship of Popcorn Wylie. Several singles and an Atlantic/Cotillion album ensued. After moving to Armen Boladian’s Westbound label, the band dropped the “Fabulous” tag and as the Counts charted with a 1971 album, ‘What’s Up Front’. Confusingly, the group also recorded at this time for Chess and Bell -though named as “Bad Smoke” and “Lunar Funk” respectively.

The Counts next move was to Atlanta where they signed to Michael Thevis’s Aware records. A couple of albums and a few singles later, the Counts folded!

In 1978 the erstwhile Counts’ guitarist/singer Leroy Emanuel got back together with his a few of his old band mates – Mose Davis, Demo Gates, and Jimmy Jackson Jr – and he managed to cobble enough money together to finance another go at making hit records. One of the songs they cut was a sweet and lovely, ‘What’s It All About’ which was eventually released on TM Records. Despite Emanuel’s optimism, the record never took off – amongst the reasons were ongoing complications with Westbound and the fact that many of the TM pressings were of poor quality!

Whatever, the record (you guessed it!) has become collectable. To meet demand Soul Junction have licensed it and are all set to release it on 7” vinyl in November and they have paired it with a tougher ‘Watch The Clock’ as the B side.

‘What’s It All About’ is a lovely, mid-tempo 70s soul groove with a powerful lead vocal from Leroy Emanuel (his phrasing, in places, might remind you of General Johnson) supported by classy harmonies from the rest of the Counts and some sweet strings.  ‘Watch The Clock’ is altogether funkier and sparse by comparison. More of a chant than a song, it features some wild guitar from Emanuel.