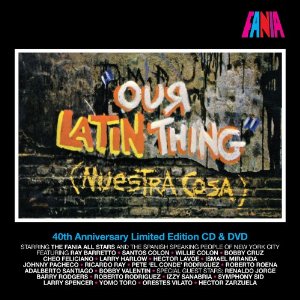 Strut Records recently signed a deal with the legendary Latin label, Fania and via that connection they’ve just released the landmark feature film, ‘Our Latin Thing (Nuestra Cosa)’ on DVD. The movie was shot at the famed New York Cheetah Club on August 26, 1971 and features the FANIA ALL STARS in concert. The band included JOHNNY PACHECO, WILLIE COLON, RAY BARRETTO, ISMAEL MIRANDA and vocalists HECTOR LAVOE and CHEO FELICIANO. Cut into the concert are shots of life in New York City and on initial release, critics acclaimed it as a wonderfully intimate and revealing snap shot of the Big Apple at that time.

The DVD comes in a three disc set – the DVD (naturally) along with a two CD soundtrack, which also includes previously unreleased selections. For more details go to www.fania.com