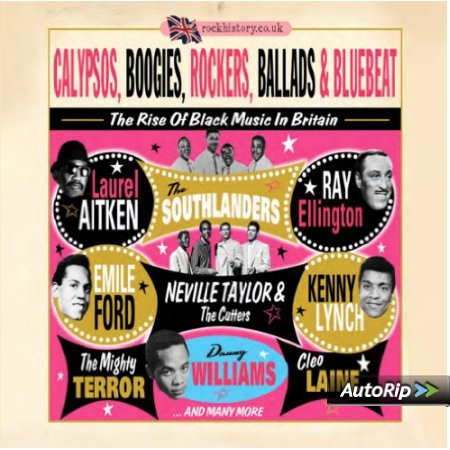 BRITISH ROCK HISTORY is an archive label that specialises in late 50s/early 60s British music. Each of its albums is focused on a particular theme and its two newest releases are exceptionally noteworthy.

Of most interest to soul, jazz and funk collectors is a 2CD, 64 track look at the early days of Black Music in Britain. The title – ‘Calypsos, Boogies, Rockers, Ballads and Blues’ – tells you what’s included. Yep, the set’s a comprehensive look across all those genres and features ground breaking recordings from artists like Ray Ellington, Shirley Bassey, Cleo Laine, Kenny Lynch, Laurel Aitken and Lord Kitchener, the self-styled “king of Calypso”. Naturally there are lots of well-known tunes and hits here –stuff like Emile Ford’s ‘What Do You Want To Make Those Eyes At Me For’ and Danny Williams’ ‘Moon River’ but what makes the collection so essential is the plethora of rare and hard to find cuts like Edric Connor’s quite bizarre ‘Manchester United Calypso’. Pride of place for the rare, though, goes to a pair of cuts from proto Merseybeat rockers, Derry Wilkie with Howie Casey and the Seniors. The group were the first Liverpool band to play in Hamburg – paving the way for the Beatles –while, with these two included tracks, were one of the firsts Scouse bands to commit to vinyl.

British Rock History’s second new archive release boasts the cumbersome title ‘Samwell, Goddard, Worth, Lennon, McCartney And More’. All, of course, were top British songwriters and the generous 64 tracker looks at some of their very best late 50s and early 60s songs as performed by artists like Cliff Richard, Billy Fury, Marty Wilde, Petula Clarke and Adam Faith. As with the Black Music set there are plenty of obscurities and we also get a revealing insight into the British penchant for novelty songs (try Benny Hill’s ‘Transistor Radio’ – a penetrating insight into our social history!) and the whole thing ends with a little known ditty- ‘Love Me Do’ – by a Liverpool-based combo called The Beatles… whatever happened to them?

For music collectors, archivists and social historians both these albums are essential and come complete with brief but succinct sleeve notes from Groper Odson. You can find out a lot more by visiting www.RockHistory.co.uk – a multimedia resource that links directly to the music. Both albums are released on 14th October.