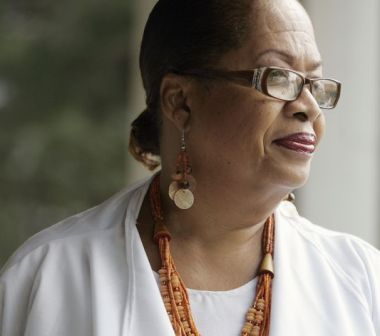 Community activist and Detroit soul singer ORTHEIA BARNES died on Friday 15th May. She was aged 70 and died in the US Virgin Islands where she was scheduled to perform. Cause of death was reported as congestive heart failure and it was known that Ms Barnes had suffered two strokes in recent years.

Ortheia was born in Detroit in 1945 – her older brother J J Barnes went on, of course, to become a Northern soul legend. In the 60s she recorded for a number of local labels including Mickay and Coral and though she was never signed to Motown she regularly performed with many artists from the Motown stable. Several of Ortheia’s tracks are available on Ace/Kent Records’ series of albums on Detroit guitarist Dave Hamilton’s productions. Ms Barnes also worked as a backing vocalist for Aretha Franklin. She was with Aretha at her White House performance in 2002 and appears in Aretha’s videos for ‘Jumpin’ Jack Flash’ and ‘Another Night’.

Though she never enjoyed major recording success she was a regular performer on the Detroit club theatre circuit and she was often called on to perform at special civic occasions, including events attended by Pope John Paul II, Bishop Desmond Tutu and Nelson Mandela.

In 1990, she opened Ortheia’s Place nightclub at Eight Mile and Stout in Detroit, but Ms Barnes saw it as much more than a club; she called it a “full-service arts venue” and put on jazz, blues, comedy, poetry readings and plays. Around the same time she found work with the Michigan Council Of Arts and after being ordained a minister became a community activist. Her husband Robert Kennerly was also a minister.

Ortheia Barnes-Kennerly was never bitter about her lack of music success. Her aim – both in her music and her ministry she said was to “reach people”; In a 1990 interview she said, “I love doing my music, but mostly I love making people feel good. The music has been good to me. I’ve had furs, cars and diamonds and all that without the million-seller. But it’s more to it than that for me. There’s a higher consciousness that lets me know I’m a part of this universe with a gift to share, and when I’m sharing that gift, I’m happy. I want to let people know that someone cares, someone understands.”