ORIGINS OF THE SPECIES…. 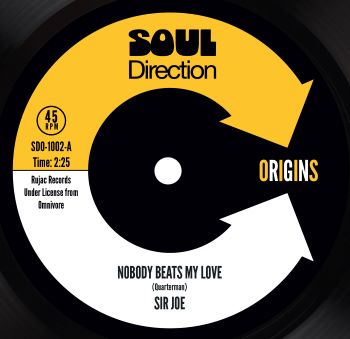 UK vinyl reissue specialist label SOUL DIRECTION are all set to launch a new imprint…. ORIGINS. Label boss, Alan Kitchener tells us that  the label will focus on rare and obscure soul releases, bringing them to a wider audience in the soul community. Alan’s quick to add that releases are licensed through the proper channels and are hopefully giving back to the writers and artists what they deserve.

Origins kicks off in fine style with a splendid pair of 7” discs – one from SIR JOE (Quarterman), the other from THE COMBINATIONS .

The Sir Joe platter pairs ‘Nobody Beats My Love’ with ‘If You Give Up Your Love’. Joe (born Joseph Patrick Quarterman in Washington DC) will be familiar to Northern collectors via his only hit ‘I Got So Much Trouble In Mind’ and from the aforementioned ‘Nobody Beats My Love’ which he recorded for the Ru-Jac label. Prior to recording for Ru-Jac, Joe had fronted bands like the Knights, the Maidens and worked with Garnet Mimms in the Magnificent Seven and after his stint at Ru-Jac he worked as “Sir Joe and Free Soul”. ‘Nobody Beats My Love’ is a classic Northern sound – rough round the edges, maybe , but still with considerable attraction. The  B-side to this Origins release, ‘If You Give Up Your Love’ is another rough and rustic sound recorded for Virtue.

The Combinations were a short-lived harmony group who (as far as is known) had just the one release – ‘Too Long (I’ve Been Waiting’ / ‘Please Don’t Leave Me’ released on Ernest Kelly’s  Soul O Sonic label. The single enjoyed regional success in and around the New York area. The Combinations then seemed to slip off the radar. One of the members , Lenny Bailey, went on to work at Ren-Rome Records and there had a single, ‘Do It With Me’ released as the “Lenny Bailey Orchestra”. It was through a link with Bailey (now aged 76) that Soul Direction/Origins has managed to secure release of the Combinations single.