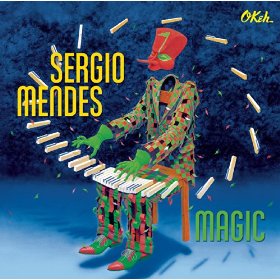 First there’s a set of five CHARLIE MINGUS LPs. They are – ‘Pithecanthropus Erectus’, ‘The Clown’, Blues And Roots’, ‘Oh Yeah’ and ‘Tonight At Noon’. The bassist recorded the albums for Atlantic between 1956 and 1961 and critics regard them as amongst his very best.

As important is the five CD set on SERGIO MENDES. The included LPs are – ‘The Swinger From Rio’, ‘In Person At El Matadori’, ‘The Great Arrival’, ‘The Best Of Brazil’ and ‘Sergio Mendes’s Favourite Things’. All were originally released on Atlantic. For the second half of the sixties, MENDES was the best selling Brazilian artists in the USA and along with people like ANTONIO CARLOS JOBIM he was responsible for creating a whole new musical idiom – the bossa nova.

The CDs come with all the original sleeve art work and though notes and commentary are non-existent, the music speaks for itself.