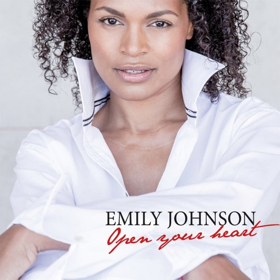 EMILY JOHNSON is a Bulgarian-born, Nigerian singer/songwriter. She’s enjoyed a career that’s seen her perform world-wide and it was at a show in the South of France that she was “discovered” by legendary guitarist John McLaughlin. The leader of the Mahavishnu Orchestra introduced Emily to his former drummer Narada Michael Walden and he quickly brought her to his famed Tarpan Studios where they recorded her debut release – the four track EP ‘Open Your Heart’.

The mini-set opens with a dramatic ‘The Light’ which we’re told is Ms Johnson’s homage to her new mentor, Walden. The broken beater that is ‘I’m Blessed’ is something very different –with rap input from G-Dub. ‘Baby Forvever’ is poppier while the EP’s title cut is a big production number in the manner of, say, Whitney Houston.