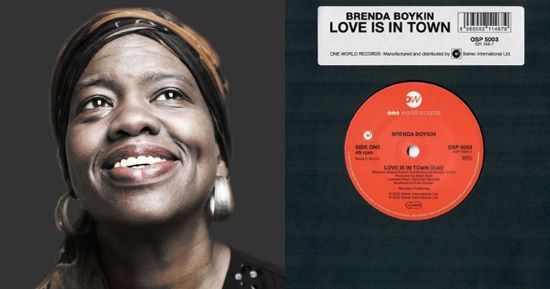 ONE WORLD RECORDS is a label marshalled by veteran UK soul entrepreneur Paul Mooney. The label has been around for a while but last November it was revamped and with this new impetus, they are currently offering two new, in-demand singles.

The first features US singer but German based BRENDA BOYKIN with ‘Love Is In Town’. The song originally featured on her 2008 album ‘Chocolate and Chilli’ and is now much in demand by lovers of the good old, soul/jazz groove à la Mario Biondi. Easy to hear why – it’s infectious and Ms B turns in a stellar performance.

The second release is ‘Yes I Am’ from American gospel singer MICHELLE DAVID who now works out of the Netherlands. This one’s a stately soul groove which proves why Ms David is such an acclaimed gospel star fronting her own band The Gospel Sessions.

Both records are good to go now via One World