ONE IN THE EYE! 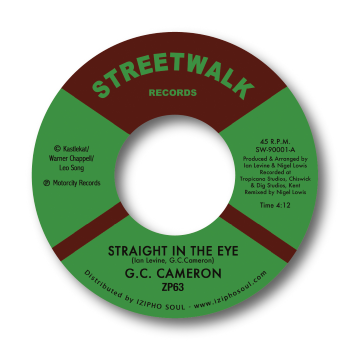 I’ve often heard DJ (writer/producer/Dr Who collector) IAN LEVINE described as UK soul’s Marmite man – loved and hated in equal amounts. One of his most controversial projects was his Motor City record label which he used as a vehicle to release re-recordings of Motown classics and  a sprinkle of new songs from Motown alumni. I think he cut a massive 850 songs using over 100 artists. The Motor City releases were originally derided by the purists and the label went bust in the early 1990s.

Ironically many of those Levine recordings are now hugely collectable and fetching big bucks. Amongst the in-demand items is a lovely tune from G C CAMERON, ‘Straight In The Eye’ . It first appeared on Motor City CD compilation in 1991 and demand is such that it’s back with us in a subtle 7” vinyl remix from master mixer Nigel Lowis courtesy of  the Izipho Soul Records subsidiary Streetwalk. Lowis keeps the sweet, Motown-esque simplicity of the original and it really is infectious with a properly soulful vocal from Mr Cameron showing why he was such an asset to both the Spinners and the Temptations.

The B  side is another Levine-sourced song, a deeper, more intense ‘No Need To Explain’ and if that’s not enough recommendation to investigate then you need to know that Izipho Records will make a donation from sales of this record to a local charity  – PSDS who provide support for children with down syndrome and their families.

G C Cameron’s ‘’Straight In The Eye’/ ‘No Need To Explain’ is out now via Izipho/Streetwalk on 7” vinyl but the pressing is limited to 300 copies. We believe that the release is (obviously) a bona fide collaboration between Izipho main man Patrick Biggerstaff and Levine himself. More to come? Find out more @ www.iziphosoul.com