ONE BRASSTARD OF A TUNE! 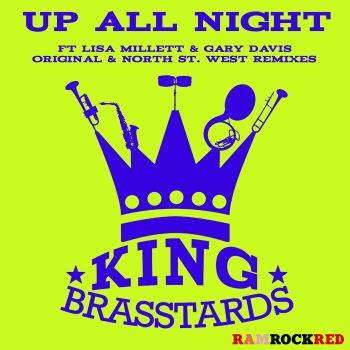 The wonderfully named KING BRASSTARDS are a soul and funk combo from deepest, darkest Leicester where they began as street buskers! At the core of the band are singers Gareth John and Spencer Hague who double up on trumpet and trombone respectively. Add to them sax man Ryan West, trumpeter Dave Collins and Steve Nutter whose “sousaphone” nickname says it all! Together, they put the brass into the Brasstards – then there’s the rhythm section – Dave Anderson (drums) and Marv Robinson (percussion)

The band is a big draw on the festival circuit, and they have two albums under their belt with a third one on the way. And that upcoming long player is the source of their latest single – a rumbustious, funky, brassy (obviously!) ‘Up All Night’.

There are four mixes on the go – the original, a “North Street West” mix (courtesy of Ashley Beedle and Jo Wallace), the North Street dub and the usual instrumental with those funkin’ Brasstards in full flow. All good to go now via Ramrock Records.