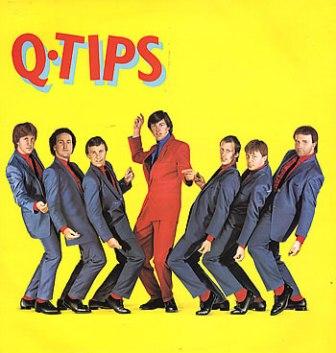 Some UK soul fans have a soft spot for PAUL YOUNG. The Luton born singer broke through in 1983 with a decent cover of Marvin Gaye’s ‘Wherever I Lay My Hat’ and subsequent hits like ‘Every Time You Go Away’ and ‘Come Back And Stay’ established him as a major star. His rough vocals always had a soulful undertow – hardly surprising since Young cut his teeth as vocalist in soul show bands – notably Streetband and Q Tips… and you can check out that part of the Paul Young story via the reissue of Q-Tips only album on RPM Records.

The eponymous album is stuffed with enthusiastic covers of soul classics like ‘Some Kinda Wonderful’, ‘Tracks Of My Tears’ and ‘S.Y.S.L.J.F.M.’ That Joe Tex song was always a show stopper and it almost gave Q-Tips a hit. Interestingly (and annoyingly) the sleeve notes claim that ‘Some Kinda Wonderful’ was a Goffin-King song originally recorded by Marvin Gaye… yes, Gaye did record a song of that provenance – but his wasn’t the original version… it was the Drifters. However the song featured here by the Q-Tips is actually ‘(She’s) Some Kinda Wonderful’ originally recorded by the Soul Brothers Six and written by group member John Ellison… c’mon sleeve note writers get your facts right!

Anyway the Q-Tips version is brash and enthusiastic and typical of their sound. After the band split Young enjoyed huge solo success and still tours with 80s nostalgia shows. He’s also part of another interesting band – Los Pacaminos –who peddle a great Tex-Mex sound…catch them at a venue near you! In the meantime enjoy some great UK soul covers with the Q-Tips!