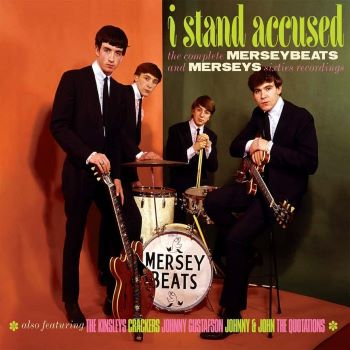 THE MERSEYBEATS were a 60s Liverpool band – the name’s a bit of a clue really! Their star shone brightly and briefly for three or four years with the band scoring a string of hits before musical tastes changed. A new 2 CD, 63 track retrospective from Cherry Red/Grapefruit records collects together everything that the Merseysbeats (and associated outfits) recorded in that Golden Age. Of course, the hits are there – things like ‘I Think Of You’ and ‘I Stand Accused’ (for which the album is named) but being a 60s band, you can bet the band’s repertoire was stuffed with early soul, R&R and R&B covers and  for collectors of 60s soul covers the album is a real treasure trove.

The Merseybeats’ first hit was a cover of the Shirelles’ ‘It’s Love That Really Counts’ while they also  scored with a version of another Bacharach classic, ‘Wishing And Hoping’ but here you can also enjoy the band’s versions of things like Benny Spellman’s ‘Fortune Teller’, Curtis Mayfield/Jerry Butler’s ‘He Will Break Your Heart’, Arthur Alexander’s ‘Soldier Of Love’ and James Brown’s ‘I Love You Like I Do’.

Of course, there’s lots of great archive pop too and across the collection you can hear the band’s sound evolve from raw beat to semi-psychedelic whimsy (blame the Beatles!). Cleverly the compliers have also pulled together tracks from Merseybeat  spin offs like The Quotations, The Kinsleys and solo work from acclaimed bassist John Gustafson, a sometime Merseybeat mainstay. Most famous spin off, of course, were The Merseys – a duo comprising of original members Tony Crane and Billy Kinsley. They enjoyed a huge hit, of course, with ‘Sorrow’. The album offers two versions, and it still has impact as it did back then (ask David Bowie, if you could!)

Crane and Kinsley still tour as the Mersybeats and their act still features plenty of their classy soul covers. Catch ‘em if you can. In the meantime, enjoy this – their legacy.

THE MERSEYBEATS; I STAND ACCUSED – out now.