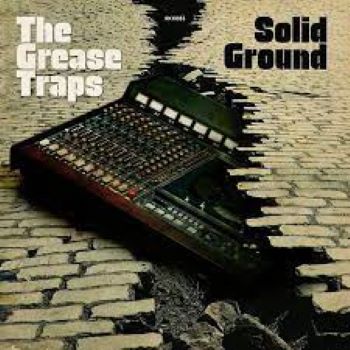 THE GREASE TRAPS are a new age, US indie soul and funk band that have evolved in the manner of artists working for labels like Daptone and Colemine. That’s to say, they’re a group of musicians drawn together by their mutual love of jazz, soul and funk but, though respectful to those genres’ heritages, they’re determined to deliver in their own contemporary way.

See if they’ve succeeded by investigating their debut album, ‘Solid Ground’ which wins release on Record Kicks on 26th November. Interestingly, the Grease Traps, in one form or another, have been around since 2000 (they were then known as Groovement, then became Brown Baggin’ before becoming “greasy” in 2005). So, yes, this debut’s been a long time coming – but the 11 tracker betrays the experience and knowledge that the band have picked up over the years!

The album kicks off with a sparse and funky ‘Roots’ and ends with an atmospheric  ballad ‘It’s A Trap, part II)’. They prove that lead singer Daryl “The Gata” Norcott can go from tough to sweet in an instant. In between those book ends there’s plenty more funk – like ‘Hungry For Your Love’  and ‘Bird Of Paradise’. Amongst the highlight is a wonderful Booker T and the MGs pastiche – humorously titled ‘Amazing Grease’.

‘Solid Ground’ also offers three intriguing covers – a take on the Mighty Mocambos ‘Get in the Groove’, a cover of a Maze 1977 B side, ‘Colour Blind’ and a version of ‘Bold Soul Sister, Bold Soul Brother’ originally recorded by obscure band The Black On White Affair’. Those refences show you where the Grease Traps are coming from!