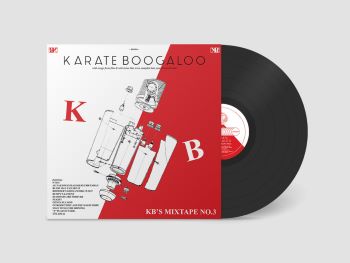 KARATE BOOGALOO is a quirky Aussie soul/funk/jazz band – an off shoot of the Melbourne outfit The Cactus Channel. I’m guessing that they take their name from Jerry O’s classic soul cut ‘Karate Boogaloo’ but I’m not sure. What we do know is that the four piece specialise in idiosyncratic versions of well know tunes and they release them on what they call their ‘Mixtapes’ and the band’s ‘Mixtape 3’ has just been released.

This 12 tracker is subtitled ‘Songs from Film & Television’ and the tunes that the KBs have chosen are TV and film themes which have all been previously sampled in other genres and here the band offer them in what they call “their wonky, left-field instro-soul style”.

Soul fans will (just about) recognize ‘Bumpy’s Lament’ from ‘Shaft’ and ‘T Plays It Cool’ from Marvin Gaye’s ‘Trouble Man’ soundtrack. Amongst other tunes to get the KB treatment are ‘Diamonds Are Forever’, ‘Flight’ from the Bernard Hermann soundtracks ‘Psycho’ and ‘Gonna Fly Now’ – the ‘Rocky Theme’. Those and the other cuts are right out of left field but full of interest and intrigue and are already winning support from DJs like Gilles Petersen and Huey Morgan.

‘KB’s Mixtape No. 3’ will be available on vinyl and digital via College Of Knowledge Records