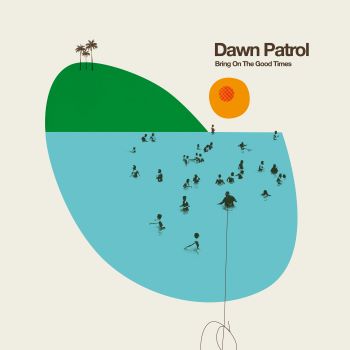 DAWN PATROL is a Dutch band that peddles a sweet take on what we might call blue-eyed soul or even yacht rock. The Patrol collective is led by the prolific Dutch producer, songwriter and musician Phil Martin and his partners in musical crime are Rik van der Ouw and Ruud van Halder plus vocalists Baer Traa and Lo ‘Garp’ van Gorp.

They initially came together via their mutual love of 70s soft rock and what became known as the “West Coast” sound  and it’s that laid back, harmonic, melodic sound that runs right through the 11 tracks on ‘Bring On The Good Times’, their debut album.

The album title sort of says it all… the band try (mainly successful) to recreate that special, soothing warm sound. With that in mind the focus cut has to be ‘Nostalgia’ – a gentle paean to the warmth of a perceived wonderful past. Sonically it has a feel of Steely Dan; elsewhere there are flavours of the Eagles, Hall and Oates and, in places, even mellow Tower of Power – try ‘Blossom’ and the album title track.

There’s nothing not to like here… pleasant, harmonic, slick and polished and making few demands. If that’s your boat floater you may want to investigate! Out now via Legere Records.