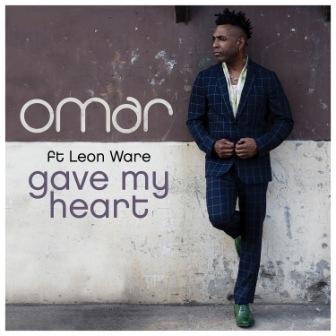 OMAR released a fine album back in January and one of ‘Love In Beats’ key cuts was the LEON WARE collaboration, ‘Gave My Heart’ a stately, mid-tempo groove with lush orchestration and that special ethereal quality that’s always there when Leon Ware’s involved. Omar and Leon are pictured below.

Well right now Omar’s label people, Freestyle, have decided to release the song as a single and as is the modern way, it comes in plenty of varied remixes. The six track ‘Gave My Heart’ EP features no less than four versions of the song. You get the original tweak, of course, but then there are new treatments from Omar’s brother, Roland (Scratch Professor), Cool Million/Sed Soul’s Rob Hardt and DJ Jazzy Jeff.

Not much to choose between them. The three mixers respect the original and keep the soul quotient high and allow Mr Lye-Fook’s fluid vocals to do the work. As you’d expect the beats on the Rob Hardt mix are bob on while Scratch Professor adds a little quirkiness at the beginning. Jazzy Jeff’s re-imagining’s a great sophisticated dancer too. By the way Rob Hardt tells us that he received the music to remix just two days before Leon Ware passed away. Rob says: “I thank you Mr Ware for all the music you left us back with and thanks to Omar for this beautiful song .”

This new EP also features a house-ified remix of ‘Vicky’s Tune’ from The Reflex while there’s one brand new tune, ‘Brainstorm’ which features an on point rap from Maurice Brown.

OMAR’S GAVE MY HEART EP is out on 2 June on Freestyle Records.