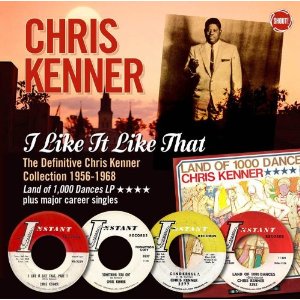 Cherry Red’s Shout imprint has just released a couple of albums aimed fairly and squarely at the oldies collectors market. First up is a 32 track retrospective on New Orleans’ CHRIS KENNER. The album – ‘I Like It Like That’ – is named after one of his two big hits – ‘I Like It Like That’. The song was a 1961 Grammy-nominated hit that extolled the virtues of a fictional club – the aforementioned ‘I Like It Like That’ – where “Sally and Sue could rock away the blues”. Prior to ’61, KENNER had been a jobbing singer – performing in local clubs, recording unsuccessfully and supplementing his income with purses as a prize-fighter. His fortune changed when he teamed up with ALLEN TOUSSAINT . The pair worked on ‘I Like It Like That’ and on his other big hit – the original version of ‘Land Of 1,000 Dances’. ‘Land Of 1,000 Dances’ is possibly best known in the versions by CANNIBAL AND THE HEADHUNTERS and WILSON PICKETT, but KENNER’S laconic take (based on an old spiritual) is insinuatingly hypnotic. Both KENNER’S hits were originally issued on Instant but label bosses did a deal with Atlantic and the famous old label issued a whole LP on KENNER based around ‘Land Of 1,000 Dances’. Sadly what money he made from that deal, KENNER squandered on drink and he eventually ended up in the Louisiana State Penitentiary convicted of rape. CHRIS KENNER died of heart failure in 1976 and his funeral was attended by few mourners though tributes were sent by ALLEN TOUSSAINT and FATS DOMINO. ‘I Like It Like That –The Definitive Chris Kenner Collection 1956-1968’ allows you to fully acquaint yourself with his story and all the music that matters.

Shout’s second “oldie tribute” focuses on TOMMY EDWARDS – another singer whose life ended in a maelstrom of drink and depression. EDWARDS was a pre-soul era crooner whose biggest hit was the sublime original of ‘It’s All In The Game’ – the only hit written by a US Vice President ( the VP was CHARLES GATES DAWES … pub quizzers take note!) EDWARDS originally recorded the song in 1951 when it was minor hit but when he re-recorded it in a slightly punchier version in 1958 it topped both the R&B and pop charts. Though his label, M-G-M, recorded him prolifically he failed to score any more major hits and his life spiralled out of control as alcoholism and depression took hold. He died in 1969 in his native Virginia – and, it’s noted, that his then abject poverty meant there was no headstone. This new Shout album, ‘It’s All In The Game’ collects together all EDWARDS’ M-G-M recordings between 1958 and 1960 –essentially four long players that reveal a smooth stylist with a vocal warmth and endearing sincerity that would have worked well in the setting of mid-sixties uptown soul… if he’d only had the chance to participate.