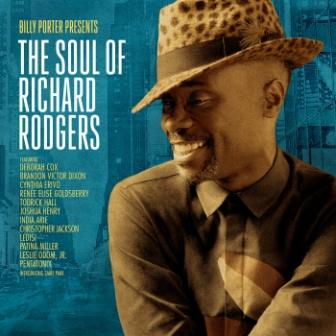 BILLY PORTER is one of Broadway’s hottest properties. Hailing from Pittsburgh, Pennsylvania, Bill’s a Tony and Grammy Award-winner. He acts, writes, directs, composes and occasionally releases his own albums… and he’s just issued a remarkable new one, his fourth, I think. The long player is winning all kinds of plaudits from the soul media (see Toby Walker’s www.soulwalking.co.uk) so we thought we needed to investigate!

We discovered that the new album ‘Billy Porter Presents: The Soul of Richard Rodgers’ is our man’s interpretation of a dozen songs penned (as the title says) by that doyen of musical writers, Richard Rodgers. Helping Billy put the jigsaw together is a plethora of names from both Broadway and the contemporary soul scene… people like Cynthia Erivo, RenÈe Elise Goldsberry, Leslie Odom Jr., Patina Miller, Pentatonix, India.Arie, Brandon Victor Dixon, Joshua Henry, Christopher Jackson, Todrick Hall, Deborah Cox and Ledisi.

Even people not particularly au fait with the musicals of Richard Rodgers (he worked with Oscar Hammerstein and Lorenz Hart) will know many of the songs…. things like ‘With A Song In My Heart’, ‘O What A Beautiful Morning’ , ‘Bewitched, Bothered and Bewildered’ and ‘The Lady Is a Tramp’ but you can be sure you’ve never heard them like this. Porter takes the songs and puts them into a contemporary R&B/soul/smooth jazz setting and the thing really works, proving, I guess, a good song is just that… a good song.

‘Billy Porter Presents: The Soul of Richard Rodgers’ is out now on Sony Music