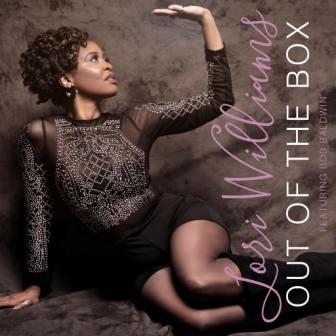 Though she’s new name to us (and I guess to most of you) LORI WILLIAMS is something of a music biz veteran with a range of skills -acclaimed international Jazz vocalist, educator, songwriter, producer and musical theatre actress.

Ms Williams is not bothered for us to know that she’s just celebrated her 50th birthday and she’s celebrating the milestone with a new album – a lovely collection of proper grown up music that she’s called ‘Out Of The Box’… named for one of the LP’s key songs and a statement that with the album she’s showing  she can work “out of the box” that people often pop her in… In her case the jazz “box”. Sure on the album there are plenty of classy jazz workouts – like the versions of ”Round Midnight’ and ‘Little Girl Blue’… the title cut is a cool jazzy offering too. However, the album bristles with plenty of sophisticated, elegant modern soul music that will recall the very best offerings of people like Anita Baker.

Indeed the album was heralded by a single that paired two such cuts – the groove-laden ‘I Like The Way You Talk To Me’ and a great cover of the Isaac Hayes-penned Dionne Warwick hit, ‘Déjà Vu’. That latter is currently garnering plenty of air play on the best soul and jazz stations. Little wonder, it’s a mini masterpiece of sophisticated soul with fab interplay between Lori’s sensuous vocals and album collaborator Bob Baldwin’s sparkling keys. The slinky ballad, ‘Our Love Is Real’ is another album highlight. Watch out too for the big collaboration that is ‘Where’s That Smile’ with vocal cameos from amongst others Will Downing and Maysa

‘Out Of The Box’ is Lori Williams’ fourth solo long player and it comes highly recommended. Of the set, the singer says: “When you reach the milestone of 50, many things begin to cross your mind. ‘Out Of The Box’ is a deliberate breakaway from me being stereotyped as ‘Lori only does this’ – this being Straight Ahead Jazz. For me to be recognized and respected within that music has been quite an accomplishment; but there is more to me. ‘Out Of The Box’ is a Neo-Soul Jazz project. When I hear my voice on these new songs, it’s a sound I really like. It’s feel good music with catchy lyrics that people can remember and walk away singing.”