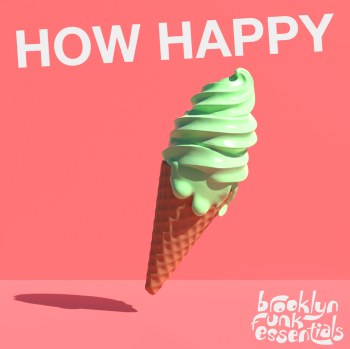 Got those old mid-January blues? Well, cult band BROOKLYN FUNK ESSENTIALS  say they have the antidote – their brand new single, ‘How Happy’ . Their people call the cut “a joyous, new R&B-disco-funk jam” and we wouldn’t argue. It’s a bright, tight dancer with bags of optimism and a great follow up to their recent singles, ‘Scream!’ and ‘AA Side Single’.

You may remember that BFE have been around for over two decades and that they have a convincing pedigree, having first come together in Arthur Baker’s Shakedown studio in New Jersey. The outfit’s current line-up is – founder and bassist Lati Kronlund, singer/guitarist/co-writer Desmond Foster, drummer Hux Flux, Kristoffer Wallman on keys, Ebba Asman on trombone/vocals, plus Loic Gayot (De La Soul, Tony Allen) on saxophone. The ever-consistent Alison Limerick is on vocals and on ‘How Happy’ she really delivers, perfectly conveying the joy and connection you feel  in  the early days of meeting someone you really  fancy.

Interestingly, ‘How Happy’ isn’t entirely new. It was originally written, yet unreleased, in the early ’90’s. It was conceived as a tribute to the S.O.S Band but for the new recording the band have added a disco gloss and some  signature horns and strings .

‘How Happy’ will feature on the band’s forthcoming album ‘Intuition’ which will be launched  with 2 UK shows  at the Jazz Café, London, May 10  and the  Blues Kitchen Manchester May 11 .