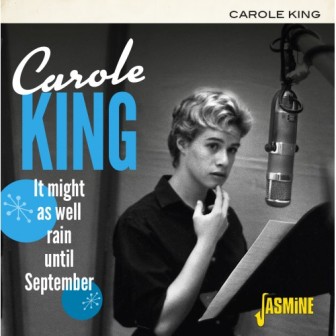 There’s no question, CAROLE KING is one of the greatest singer/songwriters of the 20th century. Albums like ‘Tapestry’, ‘Wrap Around Joy’ and many more are true classics of the genre. Why, there’s even a hit stage musical detailing her achievements.

That show, ‘Beautiful’, also chronicles her song writing prowess during the 60s. Working at New York’s famed Brill Building, chiefly with her then husband, Gerry Goffin, Carole turned out pop hit after pop hit and for a while she was a hit making pop singer herself. In 1962 she enjoyed a worldwide hit with her song ‘It Might As Well Rain Until September’ – a classic Brill Building teen soap saga. Though she was reluctant to continue as a performer (she never thought she could sing!), she released five more pop singles, including ‘Oh Neil’ – her answer song to Neil Sedaka’s ‘Oh Carol’ . None of the singles had the same commercial impact as ‘September’ and Ms K went back (very successfully!) penning songs for others to have the hits with.

Collectors will be delighted to know that all those six singles (A&B sides) have been collected together by Jasmine Records and released under the album title, ‘It Might As Well Rain Until September’. What makes the album so wonderful (and essential) though is the treasure trove of “bonus tracks”… 20 in total. What they are are Carole’s demo versions of some of her biggest songs like ‘Crying In The Rain’, ‘Sharing You’, ‘Go Away Little Girl’ and ‘When My Little Girl Is Smiling’. Presented simply – mostly just voice and piano, the beauty of the melodies and the innocence of the lyrics shine through! In short, those bonuses make this release one of the most important collectors’ reissues of 2019.