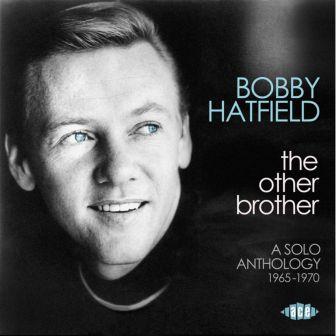 The great BOBBY HATFIELD was “the other Righteous Brother”. He was the one with the higher voice and alongside partner Bill Medley, they created some of the very, very best blue-eyed soul. Indeed their Phil Spector-helmed ‘You’ve Lost That Loving’ Feeling’ consistently tops “best ever” polls while we’re told it’s the most played single song on US pop radio!

Both Bill and Bobby pursued solo careers beyond their collaborations and though there are a number of Medley retrospectives out there, you’d be hard pressed to find too much on Bobby Hatfield on his own…. till now that is!

Ace Records have just issued ‘Bobby Hatfield – The Other Brother; A Solo Anthology 1965- 1970’ – a splendid 24 track overview of Hatfield’s career and it contains his best solo sides and key Righteous Brothers recordings on which he was the lead (indeed the only) voice… well-known items like ‘Ebb Tide’, ‘I Love You For Sentimental Reasons’ and, of course, the chart topping version of ‘Unchained Melody’ .

Amongst the bona fide Bobby Hatfield solo cuts are a number of wonderful Brill Building songs – Mann/Weil’s ‘Hang Ups’ and ‘See That Girl’ and Goffin/King’s ‘So Much Love’. You also get Bobby’s entire 1970 album ‘Messin’ In Muscle Shoals’. Yes, it was recorded down at FAME and it contains his versions of songs like ‘Let It Be’ and ‘You Left The Water Running’ alongside tunes written by top Southern soul writers like George Jackson and Clayton Ivey.

Amongst the 24 tracks, there are nine that have never been issued before including the semi-autobiographical ‘Brothers’. Together they show that there was an awful lot more to sweet-voiced brother Bobby Hatfield than those pop radio stations would suggest!